Of all the translation travesties out there, bad translations on tombstones and memorial markers make me the saddest. 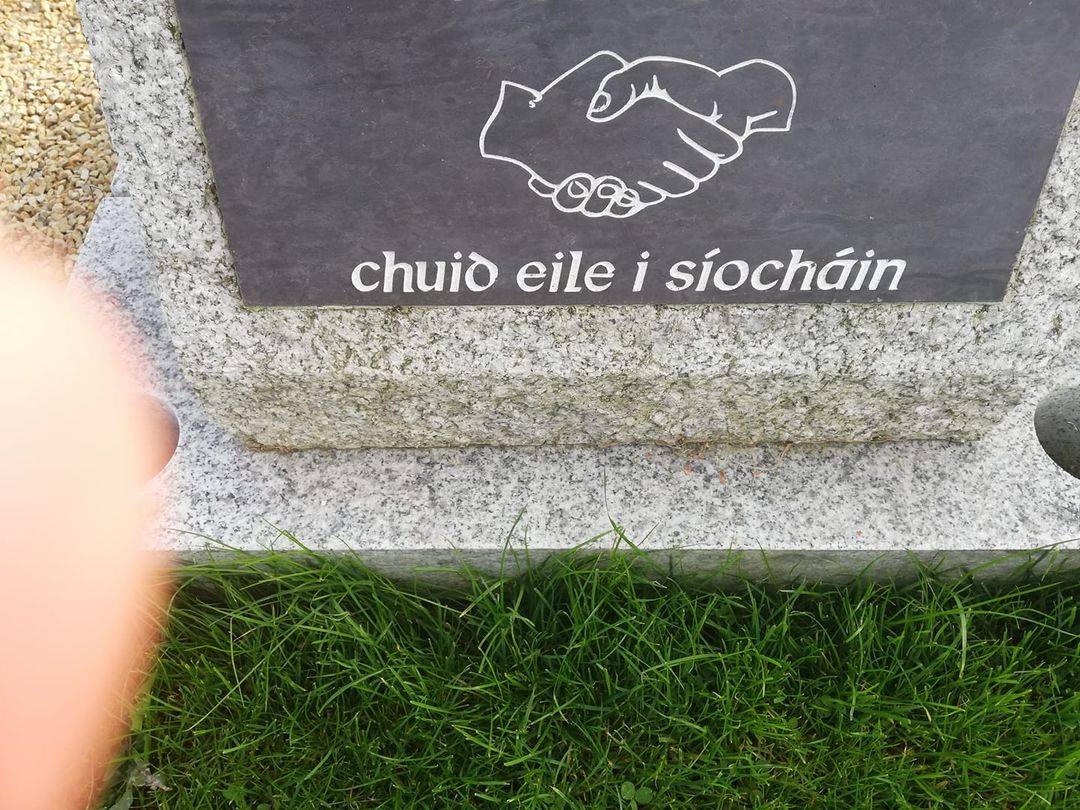 Of all the translation travesties out there, bad translations on tombstones and memorial markers make me the saddest. Someone wanted to honor a loved one or a respected individual with this ingraving, didn’t do adequate research, and now their heartfelt sentiment is a laughing stock on the Internet.

The really sad thing is that this particular translation travesty is all OVER the Internet (not only on this person’s memorial), presented as the way to say “Rest in Peace” in Irish.

So what’s wrong with it?

As you’ve probably guessed from the title of this post (and from the fact that this is a picture of either a tombstone or some form of memorial marker), whoever commissioned this intended it to say “Rest in Peace.”

And then there’s that idiom thing

Wrong word choices and spelling aside, another thing that’s wrong with this is that it’s not how you’d express this sentiment in Irish. Whoever came up with this attempted a direct, word-for-word translation from English, and if you follow this blog you already know that that just does not work.

I’ve said it before, and I’ll say it again (and again and again): Languages are not codes for one another.

(I stole that line from someone long ago, and I can’t remember who, but it’s a good one, so I think I’ll keep it.)

Word-for-word translations rarely work between languages, especially not when the languages are as grammatically and culturally different as Irish is from English.

To begin with, “síocháin,” which means “peace” as in “the absence of conflict,” while not wrong per se, is probably not the word that would be used to express this sentence in Irish. A more usual choice would be “suaimhneas“– “tranquility/rest/repose.”

In addition, when we wish a particular state or emotion on a person, we don’t say they’re “in” that state, we say that state is “on” them: “Suaimhneas air/uirthi/orthu” (“Peace/rest on him/her/them”).

This brings up yet another point: In many cases, when translating to Irish, you need to know what pronoun to use. Irish loves pronouns, and will happily use them where a verb might be used in English. If you’re speaking of a person or animal you often need to know either the gender (or the preferred pronouns, in the case of a person) to translate correctly.

How did it get this way?

When we see a terrible translation such as this, the first impulse is to blame machine translation, which doesn’t handle Irish well at all.

Rest in Peace: No translation

Rest in peace: No translation

I’m guessing that, if machine translation was used to produce this, it wasn’t Google.

The horrifying thing, though, is if you plug “Chuid Eile i Síocháin” into Google seeking an English translation, it does give you “Rest in Peace.” Even more horrifying is the fact that you can’t change it. It gives you a chance to “offer a better translation,” but not to say “this makes absolutely no sense.

It’s also possible that the person attempted a word-for-word “translation” from an English-Irish dictionary and (predictably) got it wrong. We may never know for sure.

It’s even likely that whoever commissioned this stone found this “translation” on the Internet. There’s a lot of really bad Irish on the Internet, which underscores the lessons to be learned from this and all other bad Irish translation:

Do not — I repeat, DO NOT — attempt to translate from English to Irish yourself unless you’re fluent in the language. Do not simply use something you found on the Internet (or in a book, or in a song, etc.) without verifying it with an expert. Finally, if you’re not using a paid human translator (which you really should do, if possible), make sure at least THREE PEOPLE AGREE, on the correct translation before doing anything permanent with it. Preferably three people from different sources.

I, and the Irish language, will thank you.