This language isn’t a toy for you to use to make yourself feel “special” or “unique.” Take the time to get it right. 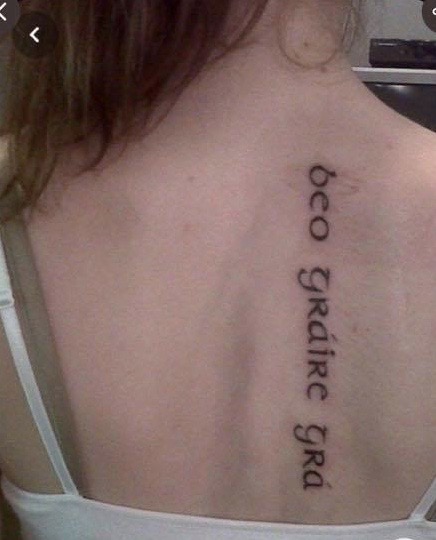 I’ve been racking my brains lately, trying to thing of something to write about after six months of COVID hiatus. Adjusting to working from home  (yes, I have a day job), and dealing with the stress, worry, and day-to-day concerns really took their toll on the creative process.

Then, two days ago, I opened up Facebook and there, right in front of me, was this gem of a bad Irish tattoo, shared to my page by a friend (Thanks, Máire Uí Brádaigh! Facebook friends rock!)

Ever since I began learning Irish, in  2004, “Live Laugh Love” or some variant thereof (some want “Live Love Laugh” or “Laugh Live Love”) has been the single most common tattoo translation request among women.

(Seriously, if you’re looking for something original, this ain’t it)

Why they want it in Irish I have no idea, but want it they do. If my experience is any indicator, there must be hundreds of women with some version of this permanently marked on their skin in Irish — the lucky/smart ones in good Irish. The others, not so much. Three guesses as to which this person is.

Suffice it to say that what she has on her back is NOT “Live Laugh Love” — in “Gaelic” or in any other language.

(By the way, if you’re curious, the single most common tattoo translation among men is some variation on “None but God may judge me/Only God can judge me.” Dudes can be unoriginal too.)

So if it doesn’t say “Live Laugh Love,” what does it say? Let’s start with the first word: Beo.

English is full of words that are spelled the same way but that sound different and have different meanings (the technical name for these is “heteronyms”). “Live” is a prime example. If you pronounce it to rhyme with “give” it is a verb meaning, depending on context, “exist,” “survive,” “enjoy/experience life,” etc.

If you pronounce it to rhyme with “hive,” however, it is an adjective meaning “alive” or “living” (for example “live bait,” i.e., bait that is alive).

When people with a limited understanding of how languages work attempt to do their own translations (note: this is a very bad idea), they tend to forget this tiny detail. You can read more about this in another blog post I wrote a while back: “It’s a Long Life with a Bad Tattoo.

To put it simply, our tattooed friend grabbed the wrong one. “Beo” means “Alive.”

The second word (really a non-word) is causing a great deal of hilarity on the Irish-speaking internet because, at first glance, it looks like the “translator” intended to write “stud horse.”

Fortunately (I guess), she kind of missed the mark there, as the word for a stud horse is Graíre and what she has there is “Gráire.” The presence (or lack) and placement of an accent mark makes a huge difference in Irish. Put it in the wrong place, leave it out, or put it in when it isn’t called for, and you have a different word.

For more on this: Are You a Fada-less Child?

So the sort-of good news is that she doesn’t have “stud horse.” The bad news is she has nothing at all. “Gráire” isn’t a word in Irish.

It’s likely the person was aiming for “Gáire” — “Laughter/a Laugh.” What she has, though, is nonsense.

And then there’s grá

As the saying goes, even a broken clock is right twice a day (well, an analog one anyway!). “Grá” does indeed mean “love,” but it’s a noun, not a verb.

There is a verb “love” in Irish — gráigh — but it’s rarely used. A more usual way of telling someone to love would be tabhair grá : “give love.”

How does this happen?

There are lots of different ways that this kind of mis-translation can happen. One of the most common is a misguided attempt to do a word-for-word translation using a dictionary.

It would be handy if languages worked that way (All you’d have to do is memorize a bunch of vocabulary and bingo! You’d have another language!). Unfortunately for would-be translators, they don’t.

Aside from such pitfalls as the aforementioned heteronyms, the fact is that different languages just work differently. Some examples:

English: I love you

Here’s a pretty classic (and horrifying on many levels) example of what can happen when someone attempts a translation using a dictionary: Even Racists Got the Blues.

Sometimes this happens because someone asks a friend or family member who misrepresents his or her level of Irish. Sadly, this happens way more often than it should. The reality is that true fluency in Irish is rare, even in Ireland, and people who are truly fluent are often reluctant to do this kind of translation for various reasons.

So how DO you say it?

As I mentioned above, this is an extremely common tattoo translation request, and various Irish forums have struggled with the best way to express it.

To express it using verbs is kind of awkward, and can be ambiguous. Irish isn’t English. “Simple” translations often aren’t all that simple.

What I usually suggest is to use nouns:

It’s OK to want a tattoo in Irish. Just , whatever you do, please have enough respect for the language and the culture to get it right. Spend the time and, if necessary, spend the money to get a solid translation. This language isn’t a toy for you to use to make yourself feel “special” or “unique.”

If you need help, drop me a line in the comments below and I can give you some guidance.